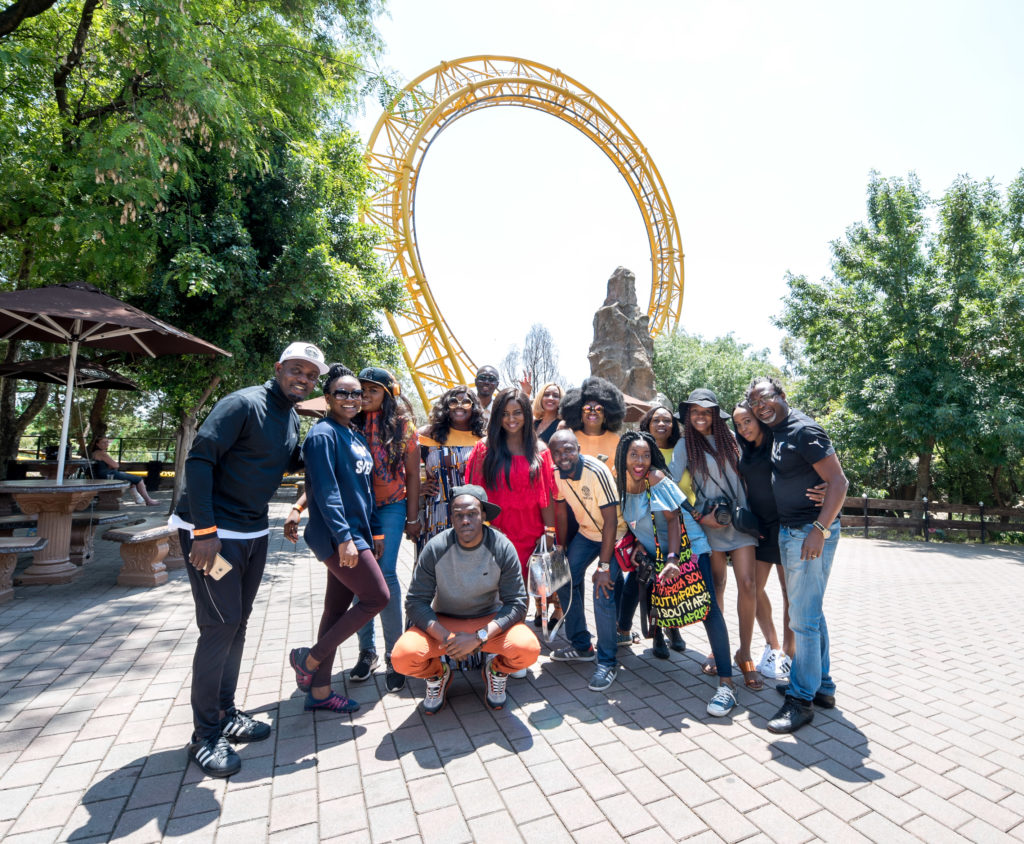 South African Tourism West Africa organized an 8 day tour to South Africa for top celebrities & media personalities to explore the beautiful sceneries and culture of the country. The fun-filled, eight-day experience focused on the Gauteng and North West Provinces.

After a 5 hours journey on South African Airways flight, the guests arrived at the O.R Tambo International Airport in South Africa’s metropolitan city of Johannesburg. The guests checked into The Cascades hotel, a 5 star hotel located in the iconic Sun City, North West Province.

On Day 1, Praiz and Project Fame Winner, Okiemute blessed the group with a ballad duet as they couldn’t stop themselves after they spotted the grand piano at the Palace of the Lost City Hotel.

Day 2 was kick started with a big bang! Guests indulged in a quad biking adventure around the African bush in a private game park named Letsatsing near Sun City and the Pilanesberg National Park. Guests encountered wildlife: Impala, majestic giraffes, and rhino footprints were spotted along the trail.

It was day 3 and the guests broke the internet!!! Off the guests went to Elephant Park. The Elephant and Monkey Sanctuary is situated in Hartbeespoort Dam. Founded in 1999, it is a mere 45 minute drive from Sandton. The guests got to touch, feel and even walk the elephants.

Next stop was the Lion Park, only a 30 minute drive from Sandton, Johannesburg. It offers terrific close encounters with lions, other predators and large herbivores indigenous to Africa. Guests had the awesome opportunity to come close to the lions, and what would a visit to Lion Park be without photo proof to back it up?!?

The next day was dedicated to a little walk down history lane in Pretoria, South Africa’s executive capital. The guests were brought up to speed with South Africa’s now celebrated fight to freedom. True to the name, Freedom Park and the Union Buildings were the next destinations.

Here, some of the guests took photo bomb photos with the statue of late apartheid activist and historical legend, Nelson Mandela which overlooks the entire city.

The next day was dedicated to Gold reef city, Gauteng’s premium theme park located in Johannesburg and only a meager 35 mins from Sandton.

Soweto! As soon as the next destination was announced, all were excited as the name is so synonymous to South Africa and its history as well as, the legendary Nelson Mandela. True to its synonym, the guests headed off to what is popularly called ‘the Mandela house’ on Vilakazi Street, Orlando west which was where Mandela lived from 1946 to 1962.

The next day, the guests came out to be received by a surprise… vintage mustangs and dodges.

Next up was the infamous Sunday lunch boat cruise. The guests were treated to a relaxing boat ride gently cruising along the waters of the Harteebeesport Dam at the foot of the Magaliesberg Mountains.

Finally, there was need for some retail therapy! Sandton City could not have been more ideal for this therapeutic session as it is one of Africa’s most prestigious shopping centre. Luxury and elegance are befitting words that describe the mall.

What better way to say goodbye than a top of the range dinner at the very same Hotel the legendary Nelson Mandela stayed at while he completed his award-winning book, ‘the Long walk to Freedom’. Its 8-minutes distance to Sandton makes it ideal for business travellers, but it is equally favoured by those en route to safari destinations.

Dinner was served and the guests went around giving a vote of thanks to South African Tourism for the amazing opportunity provided them to experience the luxuries and diversity that South Africa had to offer. The thanks were in surplus with the guests vowing to return with their loved ones.

Alas! It was goodbye but for many, only the beginning.

What Went Down At LBFW With BLK OPL Nigeria